The owner of the U.S. trucking company where the fatally shot Kyrgyz citizen worked gave his version of events on his Instagram page. His name is Adilet Muratbekov.

According to him, the allegation that Nurgazy stole the trailer because of not being paid is false.

“I’ll start by saying that I’m sincerely sorry that Nurgazy left us. I am still in shock because I had a very good and trusting relationship with him. Nurgazy joined our company through my acquaintance, Max, on August 31st. Any unpaid money is out of the question here! He came to us from another trucking company where he’d had some trouble. He passed the drug test and the background check. Everything was clean”, he wrote.

According to Muratbekov, it all began on October 2nd. That’s when Nurgazy called him on a video call and accused Adilet of breaking his trailer. Muratbekov thought it was a prank, but Nurgazy was actually very angry.

Later, Nurgazy called back and apologized to the owner of the company, saying, ”Oylonboy ele koi (don’t worry), everything is alright”.

The next day, October 3rd, Adilet Muratbekov arranged a toi (party) to celebrate his daughter’s birthday. According to him, Nurgazy was on the guest list.

“Around 8 p.m., a photographer ran up to me with a frightened face and started asking who that guy was and whether he was one of our guests, as he bad just tried to steal her camera. She managed to get the camera back by force with the help of the kitchen staff, but then the man escaped through the back door of the kitchen. I was very angry with him and went outside to call him. When he answered, I demanded an explanation for his behavior,” says Adilet Muratbekov.

However, Nurgazy continued to say strange things and called him to a meeting. Muratbekov refused, because his guests were waiting for him.

“I told him that we could not continue to work this way, and I asked him to come to the office the next day to return the trailer and terminate the contract,” he said.

On October 4th, Adilet Muratbekov contacted Nurgazy and asked him to come to the office. But, according to him, Nurgazy refused, telling Adilet to come to pick up the trailer himself.

“I told him that, in that case, I would have to write a report to the police about the theft of the trailer, to which he replied, ‘You can report it to whoever you want,’” wrote Adilet Muratbekov.

Then Muratbekov called the police. According to him, all his co-workers and friends, as well as a policeman, advised him to report the theft, because Nurgazy’s behavior was inappropriate and he could have done something more serious.

The next morning, the police called him and asked about Nurgazy. They reported that there had been a 911 call at about four in the morning and there had been an incident involving a truck and a driver. It was discovered later that Nurgazy had died.

Muratbekov added that on October 8th they got in touch with one of the eyewitnesses, Elaman, who recorded the video of the incident with Nurgazy, which was published on social networks. He reported that Nurgazy attacked him with a knife and broke the windshield of another person’s car. Then the police arrived.

According to preliminary information from the Kyrgyz Ministry of Foreign Affairs, on October 5th, Pennsylvania State Police shot and killed the Kyrgyz citizen.

“According to unconfirmed information, for unknown reasons, citizen M.N. disobeyed police warnings and attempted to flee in a truck, hitting two police cars and wounding police officers, which resulted in several shots being fired at him,” reported the Kyrgyz Embassy in the United States.

Kyrgyzstan’s ambassador to the United States, Bakyt Amanbayev, noted that the Kyrgyz public demands a fair investigation into this tragedy and that the perpetrators be brought to justice. U.S. authorities have assured the Kyrgyz authorities that the tragedy will be thoroughly and fairly investigated. 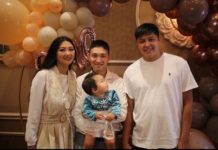