At a parliamentary session on October 13, Akylbek Japarov, Kyrgyzstan’s newly elected chairman of the Cabinet of Ministers, spoke about the situation with the Kumtor mine and litigation with the Canadian company Centerra Gold Inc. He called the disputes with Centerra “a fight against economic neocolonialism.”

Centerra Gold Inc., through its “daughter” “Kumtor Gold Company” (KGC), developed the Kumtor mine — Central Asia’s largest alpine gold deposit. Kyrgyzstan controls over 26% of Centerra’s shares and is the most important of the company’s shareholders.

However, the government of Kyrgyzstan accused the Canadian company of violating legislation and environmental damages in May 2021 and introduced external management in Kumtor Gold Company.

Kumtor is a test of maturity

According to Japarov, the mine under external management of the national government is working stably, and the gold extracted from the mine is staying in the country instead of being transferred abroad like before.

“I am grateful for Kumtor, which came into being during my career as a politician. Because Kumtor has been Kyrgyzstan’s only robust and fully sovereign operation over the entire course of its modern history […] Kumtor, in some sense, is a test on the maturity that Kyrgyzstan is now surrendering. [This is] a fight for people to live by their own minds and dispose of their own wealth, mineral resources, and air. It is a test for the people for survival and the capacity to consolidate, and for the elites for the capacity to act and the right to govern,” he said.

Japarov stated that the mine has produced five tons of gold to date, and that the Kumtor Gold Company’s account contains $100 million.

“Five or six world-class specialists have come to us with Tengiz Bolturuk. and they are working. At recent negotiations in Switzerland, Centerra representatives also recognized that the mine is working and that Kyrgyzstanis can carry out activities in such industries,” Japarov said.

The scandal around the mine has lasted for several months. In early May of this year, the October Regional Court of Bishkek decided to levy 261.7 billion soms, or $3 billion, from Kumtor Gold Company for the benefit of the state. The court found the company guilty of illegal waste storage on the Davydov and Lysyi glaciers during the development of the Kumtor mine.

Then on May 12, the state committee on the activities of KGC, which was formerly headed by Akylbek Japarov himself, summarized the preliminary results of its work. At the time, the members of the committee proposed to levy 459 billion soms, or $4.252 billion, while accounting for the funds already demanded by the court. In the end, the national government introduced external management in the mine.

In response to the actions of the Kyrgyz authorities, Centerra Gold Inc. initiated binding arbitration against the government of Kyrgyzstan. The company believes that the government’s actions violate the signed agreements between the two sides and intends to defend its rights.

The Canadian company wants to ensure a ban on the government of Kyrgyzstan introducing external management in Kumtor Gold Company and pursue KGC for recently issued fines and tax claims. Centerra believes that these are a violation of the government’s investment agreements on Kumtor.

Additionally, Centerra Gold Inc. wants to obtain compensation from the Kyrgyz side for losses and damages that arose as a result of the actions of the Kyrgyz government against Kumtor Gold Company.

So, in its account from the second quarter of this year, the company assessed damages from the transfer of the mine to Kyrgyz management at $926.4 million.

As recently as July 8, the Canadian company announced that it will present additional claims against the government of Kyrgyzstan at a court of arbitration.

Centerra Gold Inc. placed responsibility on the government of Kyrgyzstan and “Kyrgyzaltyn” for all losses and damages that it suffered because of the “coordinated seizure of the gold mine and violation of long-standing investment agreements.”

On June 1, Centerra’s daughter companies, Kumtor Gold Company and Kumtor Operating Company, appealed to the Bankruptcy Court of the Southern District of New York to initiate bankruptcy proceedings. The court has postponed the consideration of the claim for an indefinite period.

Kumtor believes that Centerra’s actions are aimed at “using any means to halt the mine’s activities” and “accuse Kyrgyzstan of the insolvency of management of such a major industrial complex.”

The first round of negotiations between Kyrgyzstan and Centerra occurred in Geneva from September 28-30.

The Kyrgyz delegation was headed by Minister of Economy and Finance Akylbek Japarov and head of the State Committee of National Security Kamchybek Tashiev. Centerra was led by the Canadian company’s president and acting director, Scott Perry.

Participants in the first round of negotiations between Centerra and Kyrgyzstan: Scott Perry, Kamchybek Tashiev, Akylbek Japarov, Kurmankul Zulushev, and Tengiz Bolturuk. According to Dolmatov, lawyers from both sides also participated in the negotiations.

Following the negotiations, Erbol Sultanbaev, press secretary of President Sadyr Japarov, stated that the head of Centerra came up with this initiative.

According to him, Perry offered to hold negotiations on neutral territory “to examine all possible avenues to resolve the complex situation, including a scenario in which Kyrgyzstan would become the direct owner of Kumtor Gold Company.

President Japarov himself later commented on the negotiations as well. He stated that Kyrgyzstan is winning in international arbitration court on the Kumtor mine.

“There are also those who say: “what will happen if we lose in international arbitration court?” We will not lose, we are winning. Okay, let’s say they beat us under the influence of the global mafia. What will happen then? Will they take control of Kumtor themselves? This is our land, our mountains, our wealth, and, finally, our people, right?” he wrote on his Facebook page.

Centerra Gold Inc. has not released statements on the first round of negotiations. 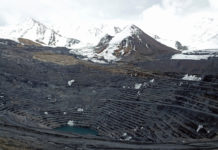