The Organized Crime and Corruption Reporting Project (OCCRP) is deeply concerned by the Kyrgyz government’s mounting assault on press freedom.

Just within the last few weeks, OCCRP fellow Bolot Temirov was arrested on trumped up drug charges, anonymous Facebook pages released private documents seized from his computers, and his employee was blackmailed with a compromising video and pressured by security services to inform on him.

Other forces also appear to be doing the government’s bidding. Most recently, four pro-government activists, supported by a former member of parliament, held a press conference calling for the adoption of a “foreign agent law” and its use against independent outlets like OCCRP member center Kloop and partner Radio Azattyk. In Russia, such a law has been used with chilling effect to crack down on independent media.

Pressure against independent media in Kyrgyzstan is not new: Temirov was surveilled in his apartment last year, and Kloop journalists have been threatened by allies of a former official they had reported on. But the latest developments — combined with the introduction of a new “false information” law that has been condemned by human rights groups — signal a dangerous and worrisome turn in a country that has been known as the most democratic in the region.

In fact, Kyrgyzstan had made a notable jump in Reporters Sans Frontiers’ 2019 World Press Freedom Index — progress that is now in jeopardy.

This week’s press conference was funded by a former member of parliament, Tursunbai Bakir Uulu, who has long been a proponent of “foreign agent” legislation. The speakers — all found to be vocal supporters of Kyrgyz President Sadyr Japarov — repeatedly called on Kyrgyzstan’s parliament to adopt a foreign agent law and encouraged public protests against the independent media outlets.

The press conference came a little over two weeks after police burst into the offices of Bolot Temirov’s independent outlet, Temirov Live, forcing staff to lie on the floor face down with their hands behind their backs. Temirov was arrested and charged with drug possession after police found a small packet of marijuana on him — which multiple witnesses and Temirov himself said had been planted. The police also confiscated the outlet’s computers.

In addition, earlier this month the government launched a criminal case against another independent outlet, Kaktus Media, alleging “war propaganda” for republishing a story by a Tajik outlet about a recent border conflict between the two countries.

Kloop is an award-winning investigative reporting center that has done unprecedented work to expose organized crime and corruption in Kyrgyzstan and Central Asia. Their investigation about a corrupt customs official, Plunder and Patronage in the Heart of Central Asia, which was published with Radio Azattyk and OCCRP, won the Tom Renner Award in 2019.

Their follow-up investigation, the Matraimov Kingdom, contributed to protests that brought down the previous government and resulted in U.S. sanctions under the Magnitsky Act.

Temirov, a well-known investigative journalist and OCCRP fellow, founded Temirov Live in 2020. The outlet specializes in publishing in-depth video investigations on YouTube. Their latest investigation was about an alleged corrupt scheme that involved the family of Kamchybek Tashiev, the head of Kyrgyzstan’s security services, which took part in the raid. 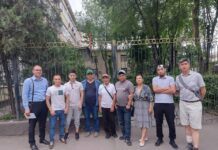 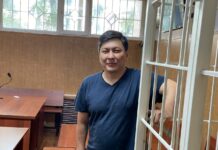 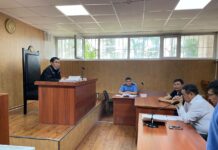