About 20 people participated in the demonstration.

More than 196 thousand Kyrgyz citizens were registered as having a disability as of December 2021.

In July 2021, Jogorku Kenesh Deputy Dastan Bekeshev said in an interview with Kloop that he has been raising issues connected with people with disabilities for close to ten years already in parliament. According to Bekeshev, he has repeatedly proposed drafting a law that would address unemployment issues among people with disabilities.

“Unfortunately, it hasn’t been supported in parliament. Because all the deputies have businesses, they don’t want to hire people with disabilities,” he said.

Bekeshev said that it’s necessary to draft a new law that could allow 16 thousand people to find work and return more than 188 million soms to the budget annually. These funds could be directed towards adaptations for people with disabilities, as well as the creation of jobs and infrastructure for them. Employers who don’t fulfill the quotas and don’t pay the fines could be held administratively liable.

In 2018, a team from Kloop conducted an experiment to show how difficult it is for individuals with disabilities to live in Bishkek. Together with people in wheelchairs, journalists walked on both sides of one of the central streets of Bishkek, Abdrakhmanova/ Baityk-Batyr Street, and reached the verdict that moving around the city on wheels requires risking one’s life.

Two Bishkek residents who use wheelchairs participated in the experiment with the journalists: internet marketer Askar Turdugulov and Aziza Iminova, a defender of rights for women with disabilities.

In an analysis of their route, the journalists reached the grim conclusion that of the 4.5 km section they walked, only 500 meters on the western side and 700 meters on the eastern side were suitable for movement by wheelchair users.

And if that’s the state of affairs in the very center of Bishkek, Kyrgyzstan’s capital, there’s no doubt things are worse throughout the rest of the country. It’s been four years since the experiment, but nothing has changed, and people with disabilities are still forced to experience discomfort and fight to have services provided to them. 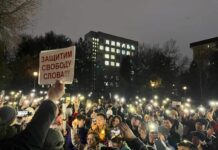 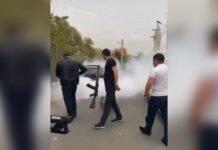 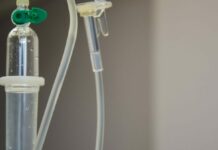