Over half of the supplies for the fight against the Coronavirus that have arrived from Turkey and Germany have ended up on shelves in the Ministry of Health, according to data from the agency’s official websites. 20,000 PCR test kits from Russia have not even made it to the laboratory. It is unclear what has happened to the rest of the humanitarian aid: the Ministry of Health is not publishing reports, and it is not responding to inquiries.

From the start of the pandemic, the Ministry of Health of Kyrgyzstan has received humanitarian aid for the fight against COVID-19 from foreign sponsors and Kyrgyz businessmen.

Evidence of their receipt is published on the website of the Ministry of Health, the “Record of Humanitarian Aid” information system, the website “e-healthcare,” and the portal help.covid.kg. But the latter three have experienced outages: they have been unavailable prior to the data being published.

There is no single form for reporting on the distribution of humanitarian aid: each of the sources publishes its data individually, and it is impossible to understand where the various supplies are being directed based on that data.

Aside from material aid, Kyrgyzstan has also been receiving grants and loans for purchasing essential goods, medical equipment, and the building and furnishing of hospitals. But it is impossible to figure out how that money has been spent: the Ministry of Health is not publishing those figures.

What do we know about the humanitarian aid?

Since April, the data department at Kloop has been gathering information about the fate of the humanitarian aid from foreign sponsors that has made it to Kyrgyzstan. We have spoken to doctors and called hospitals, but nobody knew to whom and on what basis the medical equipment, medicine, and PPE arriving in the country is being delivered.

The Ministry of Health was not answering official inquiries about the distribution of humanitarian aid, of which there were five.

But we did learn that over half of the supplies for the fight against the Coronavirus that have arrived in the country from Germany and Turkey have been left on shelves. PCR test kits from Russia—over 20,000—have not been transferred to laboratories.

What is lying on the shelves in the Ministry of Health?

In July 2020, Turkey sent a humanitarian aid package to Kyrgyzstan: 20 ventilators, 50 oxygen concentrators, 20,000 PCR test kits, PPE sets, and 10,000 tablets of the antimalarial drug hydroxychloroquine (which, according to WHO data, does not have a proven effectiveness against the Coronavirus).

The ventilators and oxygen concentrators have already been sent to hospitals. But some of the PPE sets are still sitting on shelves in the Ministry of Health. The laboratory test kits have also not been received.

The humanitarian aid package sent by Germany in November 2020 has only been halfway distributed.

In December 2020, Russia sent 20,000 PCR test kits to Kyrgyzstan, but by April 2021 they hadn’t been transferred to laboratories.

According to the head of the Center for Laboratory Trials under the Ministry of Health, Aigul Jumakanova, the test kits are “sitting on the shelves” because they are not equipped with the necessary reagents.” However, according to the Ministry of Foreign Affairs of the Republic of Kyrgyzstan, in January 2021 Russia gave Kyrgyzstan reagents for 20,000 tests. The Ministry of Health did not respond to Kloop’s request for comment on why the reagents delivered in January were not used in the test kits.

There are no credit reports

In 2020, the Islamic Development Bank allocated loans in the amount of $15 million for the purchasing of respirators, the acquisition of 30 emergency vehicles, and the building of 10 laboratories.

15 ambulances that were transferred to regional hospitals were purchased using this funding. There is no information on the official website regarding the distribution of medicine and PPE, and the Ministry of Health ignored Kloop’s inquiry on the matter.

According to the Ministry’s data, the building of laboratories has not started yet, but is just being worked out. It is unknown when construction will begin.

We were unable to find any intelligible information on the remaining grants and loans.

The absence of concrete evidence on the distribution of humanitarian aid is also reflected in the findings of the Interagency Commission to Investigate the Work of State Bodies and Municipalities in the Fight Against Coronavirus. It was established in Kyrgyzstan in 2020 and was composed of medical workers, parliamentary deputies, media and government workers, citizen activists, independent experts, and relatives of those who died from COVID-19.

“The presented reports on the distribution of humanitarian aid are incomplete and are unclear in certain areas,” said the chairman of the Commission, Deputy Prime Minister Elvira Surabaldieva, at a press conference in January 2021. She also mentioned that the Ministry of Health reports do not indicate the quantity and designation of the medicine arriving in Kyrgyzstan.

In early March 2020, border guards at the “Chon-Kapka—Highway Traffic” security checkpoint halted a shipment of contraband intended to be taken out of the country into Kazakhstan that included nearly 100,000 masks. Later in the same month, another shipment of 1.9 million masks was detained.

The Commission discovered that only 6% of the masks and respirators confiscated in the spring of 2020 were directed to state hospitals, while the rest were sold to pharmaceutical organizations. Because of insufficient PPE sets, doctors had to buy masks and respirators themselves at pharmacies at high prices, as members of the commission said.

While travelling around to hospitals in Bishkek and the surrounding regions, the Commission concluded that the healthcare system was not prepared for the “third wave” of the Coronavirus that began in the summer of 2021 either: there were still insufficient medical supplies in the majority of hospitals.

How are they distributing the aid?

One Ministry of Health employee told Kloop that all the resources received from other countries and international organizations were distributed by necessity. The hospitals sent applications themselves, which the Ministry of Health immediately processed. The supplies on the shelves are “just leftovers.”

Perhaps the large number of “leftovers” speaks to the high level of equipment in Kyrgyz hospitals?

Kloop called 24 medical facilities across the entire country. But only seven of the head doctors and hospital directors working with patients infected with COVID agreed to talk about the level of equipment in their Coronavirus units. The administrators assured us that despite the short delays at the very beginning of the pandemic, there was no deficit in the medical supplies and medicine in the hospitals, and that the humanitarian aid from the Ministry of Health arrived on time.

Ordinary doctors who had worked in the “red zones” had a somewhat different opinion.

What are doctors saying?

The “black July” of 2020 was a month in which the COVID mortality rate in the country soared to 30%. Kyrgyzstan spent the entire spring in strict quarantine, but tight restrictions had been lifted by summer. The first wave began.

Ambulances and mobile clinic teams could hardly cope: people waited for doctors for several days. To somehow help the despairing people, medics involved volunteers: students at medical universities and colleges. The volunteers gathered funding to purchase medicine, from banal paracetamol to antibiotics, protective agents, and oxygen concentrators and delivered necessary treatment to those in need.

The situation was also difficult in hospitals: there was no space in COVID units, and there was nothing to treat patients with—there was neither enough medicine nor equipment for them. The relatives of sick patients searched for both on social networks.

The medics themselves complained on social media about the absence of high-quality PPE: because of insufficient respirators and PPE, doctors started getting infected en masse. Bektur Apyshev, a doctor at the Ysyk-Ata Family Medical Center, published a photo on Twitter of gauze masks “through which even midges can slip through.”

That same doctor later released a video in which he apologized for “delivering misleading information” and showed off high-quality respirators. Apyshev assured that there was enough of such high-quality PPE in his hospital. But was that true?

On condition of anonymity, Kloop spoke with doctors who worked in the “red zones” last year. Here is what they said.

“The PPE was made of a terrible fabric, some kind of hand-sewn material,” said a doctor at one of the hospitals. “There were sponsors that provided PPE, our diaspora communities overseas helped. The Ministry of Health has not taken any kind of part in anything.”

A doctor at another hospital remembers how they were given one set of PPE per shift, and it was not always the right size.

“Last year we worked for six hours and had 12 hours off, and then it was back to the ‘red zone’ once again,” he said. “We were given a new set of PPE for each shift. The quality varied. At first the PPE was too large, or, on the other hand, [too small], and the respirators also varied. There was not enough medicine. Patients bought it themselves, they brought in concentrators themselves. There were not enough antibiotics, heparin, common saline, analgin, diphenhydramine.”

“We wore non-standard-issue outfits for two days in June: cellophane. It was very difficult then, we drained the water from our shoes after work,” he said.

All the doctors talked about one thing: Kyrgyzstan was not prepared for “black July”—there was no medicine or medical equipment, the “red zones” were not equipped in advance. “Everything was purchased in an emergency order and delivered chaotically,” they said.

It’s difficult, but we’re used to it

Right now, the situation can hardly be called stable. Doctors admit that every now and then, necessary medicines disappear from hospitals. Granted, the situation with PPE has gotten better: there is enough in hospitals, and sets can be purchased in pharmacies at an affordable price. In general, doctors have gotten used to the coronavirus: what seemed terrifying and unclear just a year ago is now viewed as routine.

“The number of serious cases in the ‘third wave’ [summer 2021] has only increased, we can’t even save the young. If someone ends up on a ventilator, it’s a death sentence. Why? Obviously, I don’t know whether the medicine we have in Kyrgyzstan is good enough,” one of the doctors shared in a conversation.

The impenetrable Ministry of Health

Over the last four months, Kloop has sent five official inquiries to the Ministry of Health. The agency has not responded to a single one of them. At first, the administrators assured that they had received no notifications from journalists, and that they are “preparing answers.” But we did not receive a single quote on the essence of the issue within the timeframe stipulated by the law.

There were also dozens of calls, both to rank-and-file clerks and executives. Every one of our interlocutors conveyed that they do not know how the humanitarian aid is being distributed and is not aware of who is involved with that issue.

We did not manage to find a person in the entire Ministry of Health of Kyrgyzstan who knew to whom and what kind of equipment was delivered. Or which hospitals are immediately in need, and of what.

This story has been prepared with assistance from the project “Monitoring International COVID-19 AID,” which is being financed by “Soros Foundation-Kyrgyzstan.” The opinions and findings in the story do not necessarily represent the views of the Foundation. 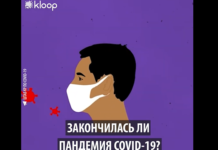 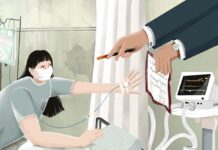 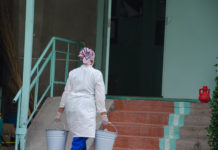 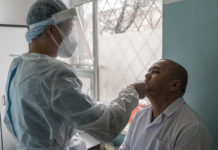 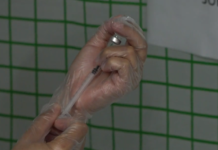