When shooting broke out on the Kyrgyz-Tajik border on September 14th, Kloop’s journalists went to the scene to cover the armed conflict. But on September 16th, the situation at the border escalated and the journalists were forced to evacuate with the other residents of the region.

On September 15th, Kyrgyz Border Service described the situation on the Kyrgyz-Tajik border as “relatively stable” and also reported that the night had passed “quietly”.

According to the Border Service of Kyrgyzstan, military clashes took place at 11 locations in the Batken district, and in 12 inhabited areas in the Leylek district. All of these places are densely populated residential areas.

Soon, the State Committee for National Security of Kyrgyzstan reported that Tajik side was trying to «seize» the territory of Kyrgyzstan.

As a result of the shelling, residents of the border villages began to leave their homes.

Because of the shelling, some roads in Batken were closed, and long traffic jams formed. Those heading for Osh had to travel through the Uzbek enclave of Sokh.

By noon, residents of more than ten villages in the Batken district bordering Tajikistan were evacuated to Batken city.

Later that day it was reported that the Tajik forces shelled the center of Batken, which destroyed civilian infrastructure. People gathered in the city were forced to leave for the direction of the Kadamjay district.

Residents of the villages of Samarkandek, Pasky-Aryk, Orto-Boz, Tash-Tumshuk, and Ak-Sai, which border the Tajik village of Surkh and are located near the Tort-Kocho area, began moving towards the Leylek district.

Meanwhile, residents of the villages of Arka, Dostuk, Zhashtyk, Borborduk, and Beshkent fled towards the mountains, to the village of Margun.

According to the latest data from the Ministry of Emergency Situations, more than 136,000 people have been evacuated from the Batken district. Signs are saying “There is a house for Batken people”.

Some villages in Batken district were left without mobile service. There have been cases where district administrative office wasn’t able to obtain information from the above mentioned places.

Evacuated residents of the Batken district were sheltered in the Kadamjay district. Sign says “There is a house”.

According to the latest data from the Ministry of Health, 59 Kyrgyz citizens died and 163 were injured as a result of the clashes. Signs say “There is a house”. 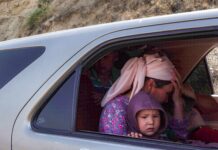 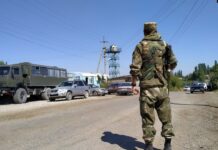 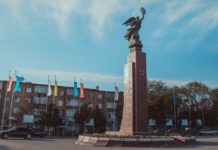 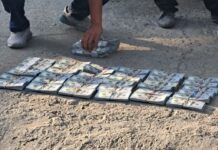 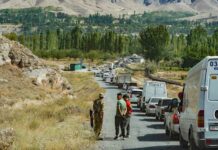